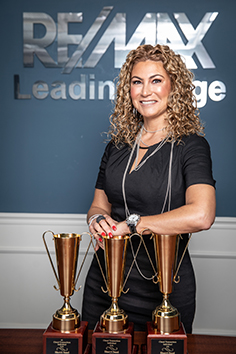 Throughout her career, Sherri’s relentless pursuit of advancement and excellence has been recognized at the regional, state, and national level.

On top of that, she has also been awarded the Lifetime Achievement from Re/Max, and a member of Re/Max’s Titan Club. She has also been named Re/Max’s #1 agent for closed transactions and earned commission in Michigan for five years dating back to 2014.

As a broker and owner of three RE/MAX Leading Edge locations in Detroit, Dearborn Heights, and Canton, Sherri has also gained national acclaim in The Wall Street Journal, ranking #10 in 2017 and #5 in 2018 for individual transactions in Real Trends-The Thousand, which is a publication firm that highlights the top one-half percent of the nation’s real estate professionals.

More significantly, she has built a roster of over 70 qualified agents whose valuable ideas and experiences play a crucial role in sharpening Sherri’s skills and in sustaining her flourishing brokerage.

By continuously displaying her grit, determination, and ceaseless work ethic, she hopes to inspire and motivate others in her offices to become the best version of themselves. As a result, the Leading Edge team has achieved greatness in the industry.

With unprecedented work experience and unstoppable work ethic, Sherri Saad is a name you can trust.